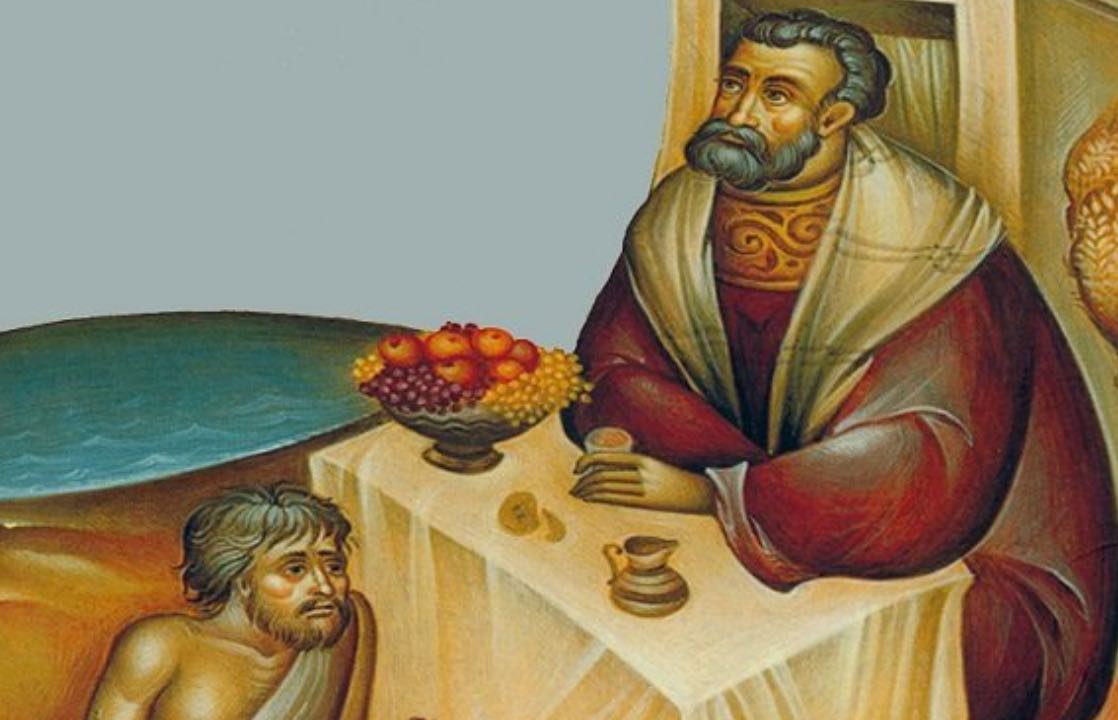 “There was a rich man who was clothed in purple and fine linen and who feasted sumptuously every day. And at his gate was laid a poor man named Lazarus, covered with sores.” (Luke 16:19-20 ESV). The chasm between rich and poor has always been clear. Yet our self-centeredness can often blind us to this contrast. Jesus continues His teaching on His journey to Jerusalem and to His cross where He will cross the chasm of our sin and bring us to Abraham’s side. Today, at International Lutheran Church we read this parable noting not only the contrast between rich and poor but more importantly the focus of our Lord as He declares the truth of the Law and the Prophets in His cross.

This familiar parable might at first glance be considered the source of our notions concerning the role of the angels in death or the state of our souls as we await the resurrection of the body. But this parable is so much more as it brings into contrast the chasm that exists in our lives both now and in the life to come. Popular culture likes to sometimes point out the “grey” areas in life and show that often things aren’t clearly distinguishable. This is not the purpose of this parable, but in fact the very opposite. If anything, this parable is the answer to the rich man’s plea that someone would tell his family clearly the differences that exist both now and in the life to come. These are the very words that warn us of the dangers of trusting in our wealth to carry us through this life or sustain us in the next. As we look at the differences between the rich man and Lazarus, perhaps we will even see our own need to “listen to Moses and the Prophets.”

One can immediately distinguish which man is rich and which man is Lazarus. We only need to consider their clothing. For the rich man, nothing but the best in color and texture. His clothing is the finest in luxury - a “feast” for the eyes and an “indulgence” for the skin. Purple - the regal color of kings - and fine linen - the pampering of softly woven cotton - declare his lofty place in life. In contrast, the only apparent clothing that Lazarus has are the sores that cover his body. Next, we can clearly see that the rich man is enjoying the finest of dishes and delicacies. His is the fare of nobles and emperors. As for Lazarus, his is the meal of the longing glance. There is nothing to satisfy his hunger and instead those festering sores become a feast for the licking dogs that likely will also eat the scraps from the table. As we look at these two states in dramatic contrast, we might go so far as to say that the rich man is enjoying a taste of “heaven on earth” while Lazarus is being tormented with the realities of a “living hell.” Yet at death, these roles and stations are reversed. Lazarus is carried to Abraham’s side and the rich man, indeed, gets what is coming to him. His is now the longing glance and the desire of the impossible.

While the rich man begs for mercy and even a warning to his brothers, the message is clear – the warning has gone out. Our wealth cannot save us or sustain us. What God has said through Moses and the Prophets all point to the One telling this parable – Jesus. Moses and the Prophets speak of how He would bridge the chasm that separates us all and that “by His wounds we would be made whole” (Isaiah 53:5). In His “poverty,” we are made rich (2 Corinthians 8:9) and “the poorest of the poor will find pasture” (Isaiah 14:30). On the cross, Jesus was dipped into the hell of our sin with all its flaming consequences. The wrath that we deserve at the lack of care we show for those at our “gate” is endless, and yet He quenched those flames with His own blood. His Resurrection becomes the testimony that opens our graves with the hope that does not end.

Jesus did tell us that we would always have the poor for whom we can show His love and grace. He also said we should not be concerned with what we eat or what we wear because He would feed us and clothe us with His own goodness. He is the focus of our faith so that the contrast in our lives – the ups and downs - can reflect His goodness and mercy as we trust in Him.