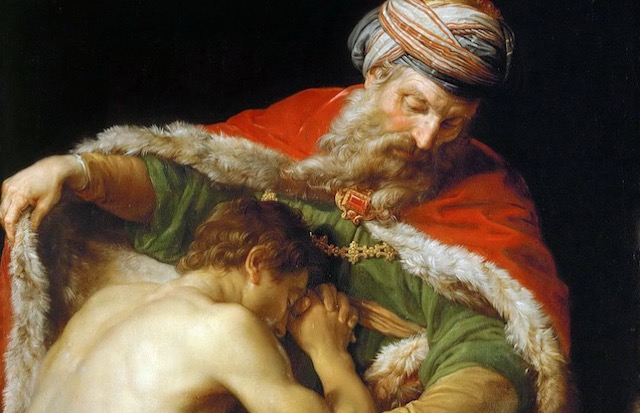 And the Pharisees and the scribes grumbled, saying, “This man receives sinners and eats with them.” So he [Jesus] told them this parable (Luke 15:2-3 ESV). During Lent we focus on our Savior’s suffering and death For Our Sake. As Jesus travels closer to His final goal and the climax of His life and ministry, His associations with certain people are called into question. Today at International Lutheran Church, we explore one of the most amazing parables told by Jesus as we consider the depths that God would go to “find” you and me.

Luke is the only Gospel writer who shares these three parables of lost items – the lost sheep, the lost coin, and the lost son (Luke 15). His introduction of the events sets the stage for their interpretation. Jesus is experiencing what we normally call “guilt by association.” While we may see Pharisees as somewhat rude and arrogant, their reaction is quite normal and likely we have experienced something similar. Mencius is famous for having revealed the problem of evil while walking through a silk dyeing enterprise with his students. What was once white silk suddenly became deep blue or vibrant red simply by being placed into a jar of blue or red dye. His disciples clearly caught his intention to point out that the good in this world is the result of being surrounded by the good, just as the evil was the result of being surrounded by evil. Many religions, even ones claiming to be Christian, are built around the entire premise that who you work with, study with, or live next to will in the end have the greatest impact on your own development and growth.

But this is the very point of Jesus’ three parables that grow increasingly, even exponentially, clear (1:100 to 1:10 to 1:2). Jesus’ search and passion for the one is not a disdain or hatred of the ninety-nine, nine or even the other one. His whole point is that only all can be saved, kept or found if every one is cared for in this same way. But the tug of social, emotional, and religious purity is strong with us. It has in fact become our very core. It is why we can go to war with our brother or treat a stranger with a ho-hum attitude. This false piety is so strong that only One could break it. Only by losing the One can any of us be saved. Only by tossing into the dustbin the most “precious of all possessions” can we be “owned again” by Him. Only in squandering His very life with the most ungodly and vile of all, can we ever be welcomed home.

Some read the parable of the prodigal son and see themselves as the wayward and lost individual who foolishly wasted what was real and good in His life. But have you ever considered that Jesus would actually lavish His Father’s inheritance on you and me? Or that He would actually sit at our table and deign to call us His friends as we lust for the foul food of swine? Jesus’ response to the well-meaning and thoughtful Pharisees is not a slam but an invitation for them to come in and join Him at His table. Jesus showed them how far God would and did go to rescue all of us. “For our sake he made him to be sin who knew no sin, so that in him we might become the righteousness of God” (2 Corinthians 5:21).

You see, each of the three parables ends with a celebration, because God’s act to save, deliver and rescue is efficacious. His love and grace changes us and brings us back to Him. We don’t need to delay or hold off until we are really serious about our faith in Him, because here we see just how serious He is with us. Paul speaks a little before these verses in 2 Corinthians of how God’s love “compels us” (2 Corinthians 5:14). Each day at school, at work, in the home or on the street we have opportunity to let His love be evident to all. In how we act, what we say and even how we reveal our true intentions, we can point to His cross and say with confidence that this was for my sake and yours! We are reconciled to one another in Him. Through baptism into Him – the deepest “dye,” we become the very vibrant display of His kind and generous acts for our sake. In His Supper we feast on Him as we are strengthened and renewed in our faith in Him. Yes, for our sake He was lost that you and I would be found!