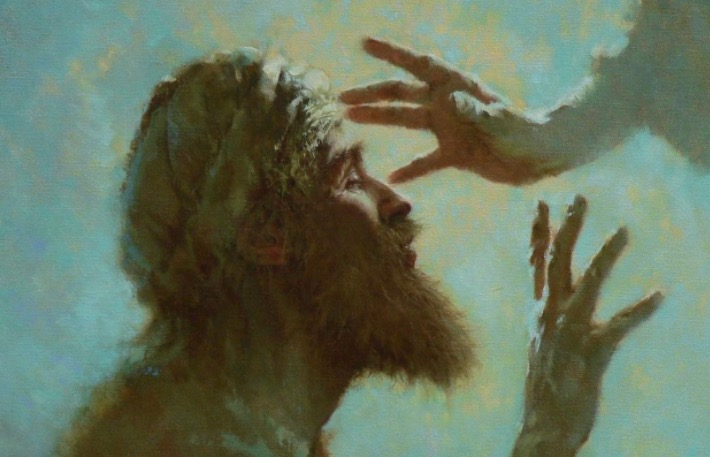 And Jesus said to him, “Go your way; your faith has made you well.” And immediately he recovered his sight and followed him on the way (Mark 10:52 ESV). Today at International Lutheran Church, we conclude our reading of Mark chapter 10. This is the story of blind Bartimaeus who, after crying out, receives his sight in faith. More than just another amazing miracle of the Lord, this is a lesson in what Jesus’ journey to the cross is all about – the salvation of all.

This story completes the three different types of encounters that Jesus has along His journey. The chapter began with the first type of those who react negatively and harshly to the ministry of Jesus. To start with, the Pharisees attempted to discredit Jesus, His teaching, and His person by testing Him about the propriety of divorce. The carefully worded question was not meant to address the brokenness of our condition but to entrap Jesus in His words.

The second type was that of the eager young man who came to Jesus asking the ultimate question of what he must do to inherit eternal life. While his earnest search and desire to know the truth can be seen in his kneeling before the “good teacher,” the brutal honesty and sincerity of where his true treasure was found can be seen in the sadness of his departure. His great wealth stood as an impossible barrier in the way of his following after Jesus. But what is impossible with man is possible with God.

And so we arrive today at the third type of encounter that Jesus has on the way to the cross. We know the way He is on because Jesus has just made His third and final prediction of what is awaiting Him in Jerusalem. He has told the disciples about the betrayal, mocking, spitting, flogging, crucifixion and the resurrection on the third day that is fast approaching with absolute certainty. In many cultures, to state something three times is one way of stressing its unchangeable nature. Jesus will become the least in the kingdom, the servant of all, the ransom of the nations. What is ironic in all this is that only the blind son of Timaeus can see it.

Jericho is the same city that was the first of many that fell to the armies of the Lord as Joshua led the people into the Promised Land. In fact, the name Joshua and Jesus are the same name. (Joshua is the Hebrew pronunciation while the English name Jesus comes from the Greek pronunciation of Joshua.) But this time the commotion is not the shouting of the Lord’s army at the command of the angel of the Lord that we hear. Instead, the ever-increasing volume of the shouts are coming from a blind beggar named Bartimaeus, and those trying to shush him.

Yet here is the good news! “Take heart. Get up; he is calling you” (Mark 10:49). What stops Jesus along the way is the very goal to which He marches – “the saving” of a blind man. The word “made well” is this same word used by Peter when he asks, “Who, Lord, can be saved?” (Mark 10:26). Yes, Jesus restored his sight. Yes, his life was transformed.  He left all he had, his cloak was tossed aside and now he was on the way with Jesus. But what is apparent here is that his faith, a gift of God itself, is fully realized in the freedom that is his in Jesus. Bartimaeus follows Jesus “in” the way. He is now in Jesus and in His way, just as we are by faith and through the gift of Baptism.

Yes, this faith is what makes us shout at the top of our lungs – Lord Jesus! Have mercy! Yes, this faith is alive in us and makes us spring up from our sad situation and readies us to shed our cares of sin and death behind! Yes, in this faith we are but beggars, and yet overjoyed to hear our Lord’s approach in His Word and in His Holy Sacraments knowing He calls  us to come to Him. Yes, in this same faith we are together “Following in the way.”