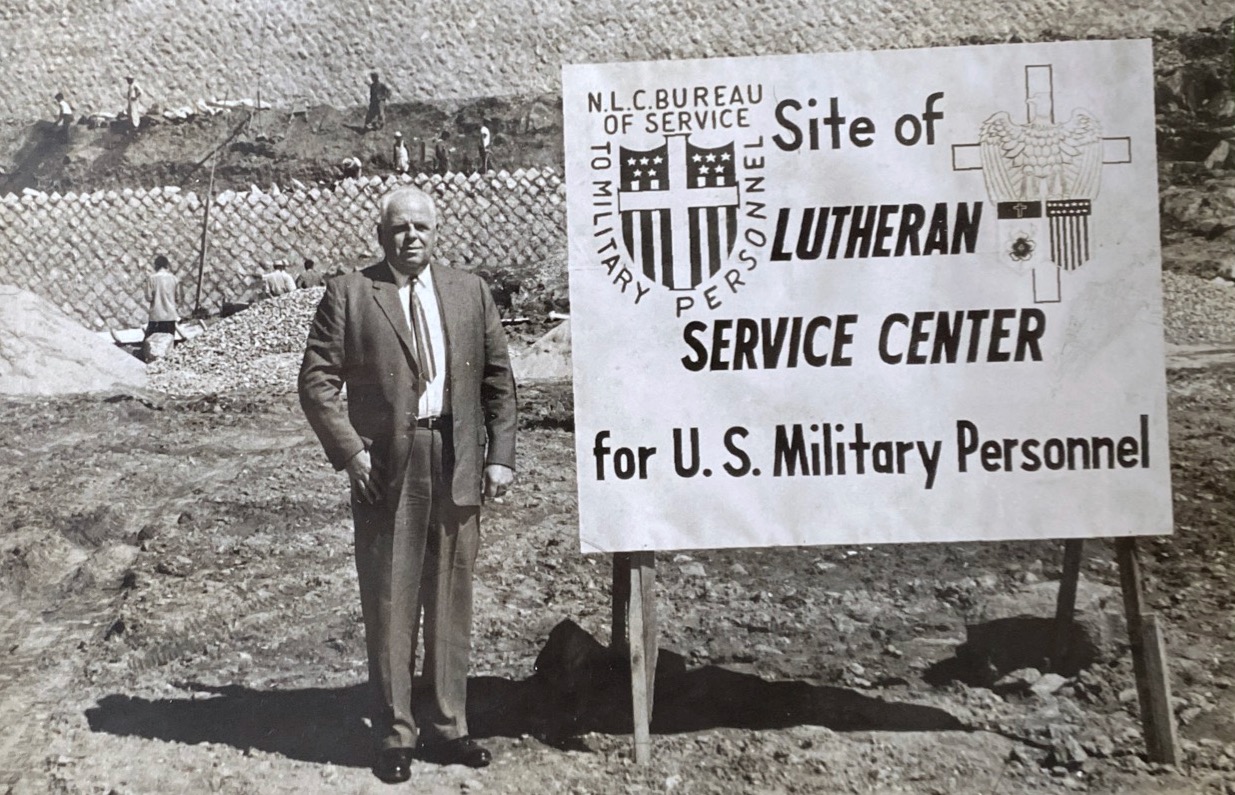 And when Paul had seen the vision, immediately we sought to go on into Macedonia, concluding that God had called us to preach the gospel to them. (Acts 16:10 ESV) Alleluia! Christ is risen! He is risen, indeed! Alleluia! The good news of the Resurrection of Jesus continues to spread. Today at International Lutheran Church we celebrate the 60th anniversary of the opening of the Lutheran Service Center here in Hannam-dong, which would later become this congregation.

Looking at the pictures of this place in 1960 and 61, you get a sense of the utter emptiness of these hillsides. There was literally nothing here, no buildings, no roads, no embankments or retaining walls – just empty hillsides. Not even any trees that I can see needed to be cleared in the construction of this site; just leveling, and terracing the empty space. But for some this was not an empty space. They could see and envision the needs of a whole community of US military personnel and their dependents. They could also see the civilian population that did not speak Korean or would want to learn English. Even the missionaries from the Lutheran church themselves could see the impact that this center and later this congregation would make here in Korea and supported it personally. Peter Dorow, a missionary kid from another generation, shared a short note with me recently of the early Sunday morning routine their family had that included a trip to English services at ILC and then a Korean congregation afterwards. He said he especially enjoyed the opportunity for a quick game of pool and hamburger cooked up by Mr. Kim.

So many memories will be shared this weekend, and hopefully the rest of this anniversary year as we see more and more improvements as well as remember more and more of the story. But it was the vision that caught the attention of one person that has become a tidal wave for many. Of course, this is also the story of Acts, and especially our reading today from chapter 16. This is THE pivotal moment where the breakup of Barnabas and Paul (Acts 15:38-41) leads to some pretty disappointing attempts to share the good news of Jesus in Asia or Western Turkey (Acts 16:1-8), yet ends up putting Paul together with Timothy and eventually Luke, himself at this very verse when “they” become “we.” But this is of course the work of the Holy Spirit to shape our lives of faith individually and to move us and encourage us to work together to share this good news with others.

Years ago, I had the chance to travel and work with another amazing missionary teacher – Dr. Allan Schmidt. After starting no less than 5 Lutheran schools on the East Coast of the United States, Dr. Schmidt was asked to lead the team that would become Concordia International School – Shanghai and later again Concordia International School – Hanoi. To hear him tell the story how the government officials revealed at the end of months of negotiation on a piece of land in one part of the city (Puxi) that the purchase was actually going to be in another part (Pudong) is truly a Macedonian moment. While there was nothing there in Pudong at the time except empty fields and frogs, Al was in fact only following a long line of others who saw the need, the people and families that would be changed not only because of an international school, but the good news of Jesus’ life, death and resurrection for them.

We sometimes wonder, “What is God’s will for my life?” We long for a vision from God to tell us what to do, but actually Luke describes the events in the same way in which you and I live each day of our lives – by faith. Yes, they had the vision – but in faith they concluded that it was God who was calling them. Each day, God is calling you and me to live in the reality of the resurrection. God is creating faith within us from the emptiness of our own selves. He is the One who is filling and fulfilling His purpose in working through you and me. He is bringing others to faith, perhaps sometimes through a vision, but often more through the things you and I say and do each day. As International Lutheran Church celebrates the Good News of Jesus – His life, death and resurrection for us – we remember what it also meant to those 60 years ago, and Lord willing what it will mean to the families and individuals 60 years from now. In the Spirit of Jesus, we have a clear direction for our life – making known the wonders of His grace to others. Alleluia! He is risen, indeed!